The reformer and founder of German Protestantism
* 10th November 1483 in Eisleben, Germany
† 18th February 1546 in Eisleben 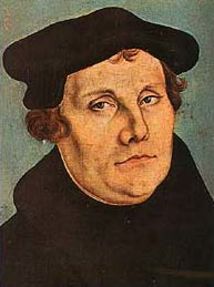 Martin Luther is one of the outstanding individuals involved in German history and boasts an international standing. As an Augustine monk, he became a Theologian and Professor and initially tried to achieve necessary reforms without splitting the church. By nailing his theses to the door of Wittenberg Castle Church in 1517, however, he started the Reformation and began his fight against the abuse of power and moral decline of the Church, as well as his fight for religious freedom. Martin Luther destroyed the outdated position of papacy and made a number of revolutionary accomplishments that had an impact both in Germany and much further afield. He cleared a vital way for bourgeois emancipation without wanting to change the feudal balances of power.

The reformer often spent time in Magdeburg and from spring 1497 to Easter 1498, he was a pupil at a school run by a pious group known as the “Brethren of the Common Life” without taking religious vows. Martin Luther visited the Augustine monastery in Magdeburg in 1516 and returned one year later for another visit. Luther gave several sermons in the monastery church (which became what is now known as the Walloon Church in 1694) and in St John’s Church in the year 1524. By doing so, he actively contributed towards guiding the Reformation in Magdeburg along more bourgeois and moderate lines. The city was ultimately considered to be a stronghold of German Protestantism andis now a member of the union of “European Cities of the Reformation”.

Luther also played an important role in supporting the advancement of the German language, using his Bible translation, sermons and tracts to promote a common German language that reached across regional borders and continued to influence literature until as recently as the 20th century.
The monument at St John’s Church, which was erected by Emil Hundrieser in 1886, acts a reminder of Luther’s visits to Magdeburg.

Learn more about the reformer in 'Magdeburg and the Reformation'.