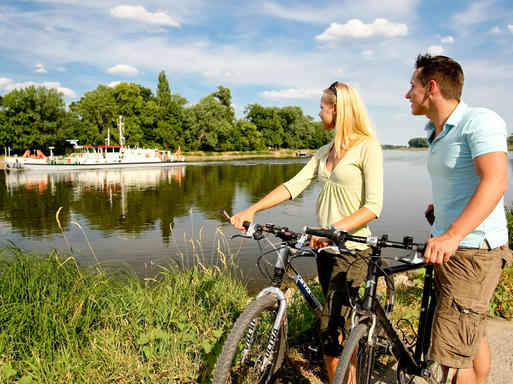 You can easily reach the Elberadweg by various means, e.g. you can use public transport and take your bike along in the tram.

Take for example line no. 4 and get off at the "Cracauer Tor" stop or take line no. 6 to the "Heumarkt" stop. Now, the cycle path lies next to you. Follow the signs leading to the Kreuzhorst reserve. From Büchnerstrasse the broad cycle path runs along the dike and you can enjoy a most scenic ride for the next 6 km. Here, the interregional Elberadweg forms part of the so-called "Kulturlandschaftlicher Erlebnispfad Elbaue" (culture and adventure path). We recommend that you slow down and take advantage of the many information boards along the way providing interesting facts and figures on the history of the landscape.

You can leave the Elberadweg in the Kreuzhorst area and continue along the excavated "Alte Heerstrasse" (old army road) towards Westerhüsen. There, you can cross the river by ferry (Gierfähre) and continue on the western bank. When you follow the signposts you can either take the same way back or use the tram again.

Tour to the Waterway Junction Magdeburg

The Elberadweg will even take you to the largest waterway junction in Europe. Take the tram line No. 6, get off at the “Herrenkrug“ stop and follow the Elberadweg signs through the Herrenkrug meadows to the Ehlekanal, passing the Weinberg nature reserve and then onto Hohenwarthe. In Hohenwarthe you leave the cycle path and instead follow the small street leading to the trough bridge. Once you have reached the bridge, take your time to enjoy the panoramic view of Magdeburg with its Cathedral on the side.

From the other side, take a look at the enormous dump of the Zielitz potash plant which is referred to as "Kalimanjaro” by the locals since Kali means potash in German. Your tour continues from the water saving lock and the old Magdeburg-Rothensee ship lift where the cycle path takes you close to the shores of Barleber lake II and then back to Magdeburg. At the end of your tour you can either take the tram back into the city centre or cycle along the August-Bebel-Damm.

The Elbauenpark embedded in the unique and scenic floodplains of the river Elbe seems to be only one step short of Paradise. Formerly a military base, this area was transformed into a spectacular and blossoming nature and leisure park which hosted the 25th German Garden Show in 1999. It was reopened on April 20, 2000 and can be visited all year round. Come and marvel at the green garden pictures in the walls, enjoy the many sports and leisure facilities, try the summer toboggan ride, watch a performance on one of the various stages, admire lush flower beds and - last but not least - visit Magdeburg's new landmark, the Millennium tower erected for the 25th German Garden Show. The unusual building hosts a unique exhibition, unparalleled in Europe, which features 6000 years of human history. Take the opportunity to travel back in time and learn about the many inventions and developments of bygone cultures.

The oldest park landscape in Magdeburg was created between 1818 and 1823. It was designed according to plans laid out by the famous garden architect Joseph von Lenné. The plans for the classical society house were made by F.W. Wolff and the splendid building was erected in 1843. Easy accessibility through the well-established traffic network and the building of a park restaurant contributed to the park becoming a major recreation facility. The horse race course, built in 1906, is an additional attraction.

The park was created on an island embraced by the Stromelbe and the Alte Elbe. It is one of the most scenic German garden parks designed in English style. The well-tended network of cycle and hiking paths makes it easy to discover the splendour of the natural scenery and the many interesting sites. Always worth a visit are the Pferdetor, the Adolf-Mittag-Lake, the look-out tower, the steam boat "Württemberg", the Civic Hall (Stadthalle) and the MDR broadcasting studios.

Many old and venerable buildings such as the Cathedral, the Monastery of Our Lady, St. John's church, the Town Hall with the Magdeburg Horseman and the Otto von Guericke monument are located within the old city centre. They are living reminders of Magdeburg's rich and colourful past.

In 1705, the main Elbe river was channelled into the river bed as we know it today. When the river was regulated as such, a new waterfall was formed. In 1997, a bridge for cyclists and pedestrians was built which connects the Elberadweg to the Rotehornpark

The Kreuzhorst natural reserve is a vast stretch of alluvial forest which extends between the Stromelbe and the old river arm. About 30 mammal species, 90 bird species and several reptiles and amphibians roam the alluvial area with its typical flora and fauna.

If you leave the cycle path and continue along the "Alte Heerstraße", an old army road which forms part of the "Kulturlandschaftlicher Erlebnispfad Elbauen" (culture and adventure path), you will arrive at the Gierfähre ferry station. The Gierfähre is a rope ferry, it has no engine and it is just led by the current of the river.

The clearly signposted cycle path leads you to this picturesque village. Visit Randau and marvel at the castle, the church and churchyard and the "Alte Schule" (old school).

A short trip to this typical Elbe village, looking back on a 1050-year-old history, is always worth your while. Visit the public court and see the Slavic building and settlement culture for yourself. Here you will learn about the origins of the village, the former Slavic ring castle.

Have a look on the bicycle routes